The lightly-armed Papuan resistance organization (OPM) expressed public support for a internationally mediated dialogue between Papuans and the Indonesian government. The announcement indicates broad unity among Papuans for a peaceful approach to resolving Papuans' myriad problems with Jakarta. In late March, Papuan demonstrators in various Papuan cities met a mixed response from police who at times used repression against the uniformly peaceful protests. The trial of Victor Yiemo began. The activist stands accused of "rebellion" under Indonesia's infamous Article 106. The Indonesian military announced plans, not yet approved by the civilian government, to significantly augment its presence in West Papua. The plan stands in stark contrast to broad Papuan calls for demilitarizing their homeland. Environmentalists have pointed to new problems with government plans to develop a massive food estate in the area of Merauke. In its annual assessment of human rights in Indonesia in 2009, the U.S. Department of State chronicles many of the cases of rights abuse, usually at the hands of the security forces, but inexplicably ignores a key June 2009 Human Rights Watch report which detailed extensive Kopassus abuse of Papuans, as well as decades of Indonesian government failure to extend health, education and other basic services to Papuans. The International Crisis Group (ICG) issued a report on West Papua which seeks to assign blame for growing violence to individual Papuan groups rather than acknowledge deteriorating human rights and humanitarian conditions. Some media reports of the analysis, abetted by an ICG official's comments, mischaracterize the report's assessment of who is to blame for recent violence in the area of the Freeport-McMoran mine. A recent violent incident in the Puncak Jaya region has local people on edge.

Ed McWilliams posted a comment on The Asia Security Initiative's March 29 post, "The Kopassus Kerfuffle" by Catharine Dalpino, who mostly agrees with his points which she says  "primarily expand on brief mentions I had made of other points (e.g., Indonesian human rights NGO concerns over Kopassus). "


The Asia Security Initiative’s March 29 post, “The Kopassus Kerfuffle” by Catharine Dalpino, is a timely and thoughtful analysis regarding the U.S. decision whether to provide training or other assistance to Indonesia’s Special Forces Kopassus.

This issue is important, as indicated by Ms. Dalpino, not only for the future of U.S.-Indonesia military relations, but also for the future of U.S. observance of the 1997 Leahy law which prohibits foreign military units from participating in military training or receiving assistance for weapons purchases if unit members have committed human rights violations for which they have not been brought to account. The decision whether or not to skirt provisions of the Leahy law is a litmus test of whether the Administration respects U.S. Congressional mandates not to provide assistance to corrupt, human rights abusing forces that remain unaccountable for their crimes.
Ms. Dalpino’s piece fails to place the U.S. debate over assistance to Kopassus in the broader context of U.S. assistance to the Indonesian military (TNI). For many years, a bipartisan, bi-cameral majority in the U.S. Congress insisted that the prospect of U.S. assistance to the TNI be used as leverage to exact real reform. This consensus was based on the recognition that this key institution had not been a part of the transformative reform movement that followed the 1998 overthrow of the military dictator Suharto. Instead, the TNI has remained the single greatest threat to democratization in Indonesia, eluding civilian control and insisting on impunity before the courts for its personnel who violate human rights or engage in illegal activities, including people trafficking.
U.S. observance of the Leahy law suffered serious erosion during the Bush Administration. In 2005 the administration used a “national security waiver” to remove remaining restrictions and U.S. assistance ceased to serve as a key incentive for reform. Unsurprisingly, faltering TNI reform stopped. Since then, the TNI failed to meet legislative requirements that it disburse its business empire which includes both legal and illegal businesses. That action, mandated by the Indonesian Parliament in 2004 was to have been completed by 2009. Failure of that key reform has enabled the TNI to maintain access to non-Indonesian government budget resources and to evade civilian control. The TNI also remains unaccountable for human rights violations and other crimes, enjoying impunity before an Indonesian justice system that is deeply corrupt and easily intimidated. Despite this the Obama administration has continued to pursue a broad military-to-military relationship with the TNI (but not its special forces).
Ms. Dalpino’s article also fails to emphasize that the debate over U.S. assistance to Kopassus is not simply a U.S. debate. Many Indonesian NGO’s and individual Indonesians are opposing U.S. assistance to Kopassus, and have urged U.S. and international NGOs and observers to join them. These Indonesian voices have been especially important and noteworthy given the risk they face for their criticism of the Indonesian military which has regularly targeted its Indonesian critics.
Finally, Ms. Dalpino raises the “osmosis” theory which conjectures that Kopassus could become a human-rights respecting organization through collaborative contact with U.S. forces. Yet, the Kopassus awful record was indelibly established during decades of close association with U.S. forces during the Suharto era. The reality is that Kopassus contact with rights-respecting Australian and other foreign forces has had no impact on the essential criminality of the Kopassus. The “osmosis” argument does not wash.
President Obama ultimately faces a choice on principle. Inevitably, that choice will reveal the level of importance he attaches to respect for human rights, accountability and civilian control of the military.
Posted by John at 1:42 PM No comments: 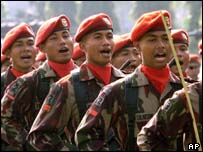 Indonesia's TV One cancelled an appearance after pressure from Kopassus by Allan Nairn to talk about his story about last year's killings by the Indonesian army in Aceh today. The Indonesian military has threatened to bring Nairn to court for his reporting, saying it is defamatory.


As I was making my way to their studio for our agreed live interview on Indonesian armed forces (TNI) assassinations, I received a call with the news that TV One, the Indonesian national news channel, had canceled my appearance due to pressure from Kopassus....

Even though TV One had agreed to interview me alone for 15 to 30 minutes, they decided unilaterally -- without telling me -- that they would only let me on air if the Kopassus commander, Gen. Lodewijk was there to rebut me.

I would have been glad to face and question the General, but the catch was that the General refused to face me.

A week ago, METRO TV ended a scheduled half hour interview:


Within a couple of minutes I was pulled off the air. A producer came on the phone and acknowledged that I had just been "censored."

Sign ETAN's petition opposing U.S. training of Kopassus.
Posted by John at 11:36 AM No comments:

La'o Hamutuk call for rejection of the Copenhagen climate accord

La'o Hamutuk has written to Prime Minister Xanana Gusmão urging that Timor-Leste to reject the Copenhagen Accord on climate change. The group offers 7 arguments including:


The Copenhagen Accord contradicts some basic principles of the UNFCCC [United Nations Framework Convention on Climate Change], including the principle of common but differentiated responsibilities. It also contradicts the Kyoto Protocol because it leaves it up to the developed countries to reduce their emissions, with no legally binding targets. It is not a democratic agreement because it was decided only by a small group of countries, not by all countries in COP. This is against the principle of consensus in the UNFCCC. If Timor-Leste associates to this Accord, we are going against some principles in UNFCCC and Kyoto Protocol that we have ratified.

La'o Hamutkuk writes that "a small group who don't want to take responsibility for their actions which have destroyed the global climate" negotiated The Copenhagen Accord.

Read the full letter here.
Posted by John at 11:03 AM No comments: