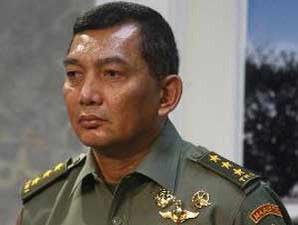 "This is Suharto redux, leaving the military in charge of itself" said John M. Miller, National Coordinator of ETAN. "Sjamsuddin appointment clearly demonstrates that the 'reformer' President Yudhoyono would rather reward former military colleagues than hold them accountable. This sets back the limited efforts to bring the Indonesian military under civilian control."

"Sjafrie is a poster boy for the argument that U.S. military training does noth instill respect for human rights in Indonesian officers, especially those belonging to Kopassus," said Miller. The Obama administration is currently considering resuming training of Kopassus.

General Sjamsuddin has spent most of his career in Indonesian military's brutal Kopassus special forces. Trained in the U.S. in 1985 and Australia in 1993, he is accused of coordinating several of the most notorious events in East Timor, including the 1991 Santa Cruz massacre and the post-referendum violence in 1999. He was military commander in Jakarta at the time troops opened fire on protesters in May 1998.

Human rights groups in Indonesia have protested Sjamsuddin appointment citing his human rights record. They also point out that the appointment violates Indonesian law, which prohibits the promotion of active duty soldiers to political posts.

"Sjamsuddin not only defends the military's system of territorial command, he has little understanding of the need for civilian supremacy over the military," said Miller.

read the rest here
Posted by John at 6:55 PM No comments:


The limitations of Gus Dur's powers in the face of the military's many-headed Hydra are nowhere more apparent than in Indonesia's policy towards East Timor. During his three-hour visit to Dili on February 28, Gus Dur hugged Xanana Gusmão, laid a wreath in honor of the victims of the 1991 Santa Cruz massacre, apologized for the scorched earth campaign of last year, and signed an accord for improving relations between the two countries. Only days later, the Indonesian military sent its East Timorese militia across the border to kill more civilians and burn down more buildings. The militias have made cross-border raids almost every day since early March. Despite public disavowals, both the militias and the military are certainly responsible. Gus Dur has denounced these raids but has been so far powerless to stop them. The military, through its militia Cerberuses, are still holding East Timorese hostage in camps in West Timor, months after insistent demands for their release from Gus Dur, the UN, and dozens of international political figures. 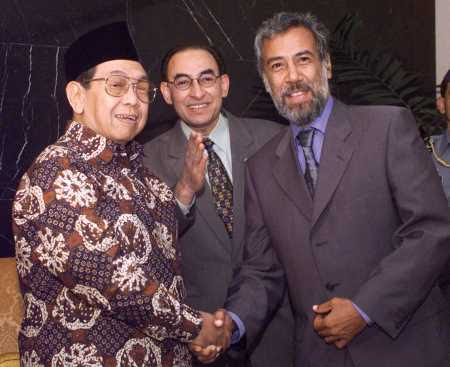 This is the 68th in a series of monthly reports that focus on developments affecting Papuans. This series is produced by the non-profit West Papua Advocacy Team (WPAT) drawing on media accounts, other NGO assessments, and analysis and reporting from sources within West Papua. This report is co-published with the East Timor and Indonesia Action Network (ETAN) Back issues are posted online at http://etan.org/issues/wpapua/default.htm.

The police killing of renowned pro-independence leader Kelly Kwalik is reminiscent of the Kopassus murder of Papuan leader Theys Eluay and has prompted calls for an investigation of police conduct. The death of former President Abdurrahman Wahid, whose Presidency was brought to an end by an undemocratic show of force by the military, is widely mourned, especially in West Papua. A formal rendering of the history of Indonesia's annexation of West Papua published by the U.S. State Department is significantly flawed. A Papuan forestry official has warned that Indonesian decentralization/autonomy policies threaten West Papua's forests. A senior Papuan official condemns the Indonesian Government's failure to protect the rights of Papuan women who fall victim to development schemers and their Indonesian military enforcers. West Papua is the epicenter of an HIV/AIDS crisis. 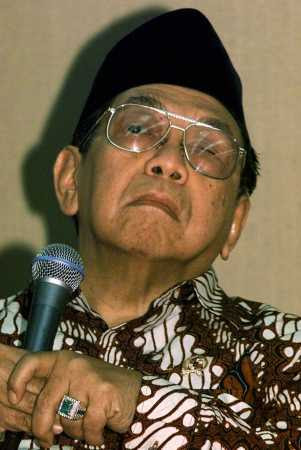 Tempo Semanal has just posted several English-language video news reports. All of them can be accessed  from their blog.

From Tempo's description of its report on the protests over the PNTL killing of Kuta late last year:

A young man was shot dead by police (PNTL) in Dili on December 28 2009. Unrest and tension on the streets followed the tragic death with calls for control of PNTL officers. Security of the government and ministers was increased during the period and President Jose Ramos Horta and Prime Minister Xanana Gusmao mediated upset family members. Jose Belo reports for Tempo Semanal.


Another covers the burial of a victim of the Santa Cruz massacre. Several bodies were found and recently identified as having been killed at Santa Cruz cemetery 18 years ago.

Two additional report involve an interview with the Minister of Tourism and end of the year demands from contractors for payment from the government.
Posted by John at 2:41 PM No comments: