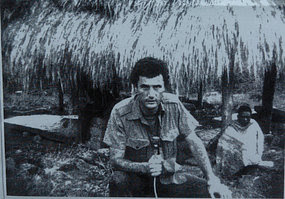 ETAN in the news on Kopassus training


“Now if we simply circumvent this law, it will be like saying, ‘You haven’t held past abusers accountable, so we’re going to go ahead and reward you,’ ” he says.

MILLER: Well as Australians would be well familiar with the killing of the journalists at Balibo in 1975, that was done by soldiers within Kopassus, to the exit of Indonesia from East Timor in 1999, Kopassus officers were heavily involved and orchestrated destruction and training of militia, to last summer Human Rights Watch released a report about Kopassus units in West Papua illegally arresting and harassing residents in the highlands of West Papua. So it's a very long history and most of those rights abuses are unresolved and in the few that have actually gone to court, such as the kidnapping of students in 1997 and 98, even where soldiers were actually convicted in court, many of them are still serving today in Kopassus.


"The best way to prevent future violations is to hold accountable those responsible for the multitude of human rights crimes committed by the Indonesian military in East Timor, West Papua, and elsewhere. Many of these crimes occurred while the U.S. was most deeply engaged with the Indonesian military providing the bulk of its weapons and training," he added.

Asia Times: US, Indonesia in a tentative embrace (March 12)


"Kopassus training is the last frontier for re-engagement and a US seal of approval for the Indonesian military," John Miller, national coordinator for the East Timor and Indonesia Action Network, said by e-mail.


"Clinton's remarks imply that Indonesian military human rights violations are in the past," the East Timor and Indonesia Action Network (ETAN) said. "But they aren't."

White House Rally - Pressure Pres. Obama to Speak Up for Prisoners of Conscience in Indonesia

The rally will feature music, lively chants, and speakers from Amnesty International as well as the East Timor Indonesia Action Network (ETAN).

Filep Karma and Yusak Pakage were jailed in December 2004 for taking part in a nonviolent protest for Papuan independence from Indonesia. During the ceremony a Morning Star flag, the symbol of Papuan independence, was raised.  Indonesian police arrested Filep Karma and reportedly beat him during his transportation to the police station.  When a group of 20 people arrived at the police station in protest, they were arrested as well.  All of them were subsequently released, except for Filep Karma and Yusak Pakage.  Mr. Karma and Mr. Pakage were tried on charges of treason for their roles in the protest and sentenced to 15 years and 10 years respectively.

Supporters of independence for Papua Province have been among those jailed as prisoners of conscience in Indonesia. While Amnesty International takes no position on the political status of any province of Indonesia, we believe that the right to freedom of expression includes the right to peacefully advocate independence.  Amnesty International calls for the immediate and unconditional release of these prisoners of conscience.

Barack Obama and his family plan on visiting the President's childhood home of Indonesia late next month to strengthen ties between the U.S. and Indonesia. This is the perfect time to encourage President Obama to pressure Indonesia on its human rights violations and freedom of speech issues, especially regarding the cases of Filep Karma and Yusak Pakage.

Support Filep and Yusak and demand the release of these unjustly imprisoned men by rallying with us!

Info about the rally: http://bit.ly/aJlwDp