The  United States Commission on International Religious Freedom has just released its annual report. The commission maintains Indonesia on its Watch List (the Indonesia chapter begins on page 255 of the PDF), citing governmental restrictions and violence against some religious minorities, including concerns


about new government decrees that are used to severely restrict, and in some provinces even ban, the activities of the Ahmadiyya community; the forced closures and vandalism of places of worship belonging to Christian, Hindu, and Ahmadiyya groups in some localities; the growth and political influence of religious extremists; the deepening sectarian divisions in Papua due to human rights abuses perpetuated by the military and police; and the harassment and arrest of individuals considered deviant under Indonesian law. USCIRF policy recommendations include urging the Obama administration to deal with pressing social, political, and economic concerns by supporting government offices, religious groups, and civil society organizations in Indonesia working to promote religious freedom, counter extremism, teach tolerance and human rights, pursue legal reform, and build interfaith alliances.

The commission in its recommendations cites the need for reform of the Indonesian military and the need to deny assistance and visas to "any police or military unit or security agency personnel found to have engaged in violations of human rights." It does not name Kopassus explicitly. It calls for the removal from conflict areas of officers indicted in East Timor. It stresses the police role in counter-terrorism, but highlights that the U.S. trained "counter-terrorism unit Detachment 88 ha[s] exacerbated existing sectarian tensions in Sulawesi. Local religious leaders claim that Detachment 88’s harsh tactics increased sympathy for extremists in Central Sulawesi and attracted religious militants from other regions. For example, in April, 2008 police shot and killed Madi, a sect leader involved in a 2005 clash with police." (page 257)

From the reports recommendations (page 266)

In addition, as part of U.S.-Indonesian counter-terrorism cooperation, the U.S. should ensure that any future ties with the Indonesian military and police should include, as priorities: 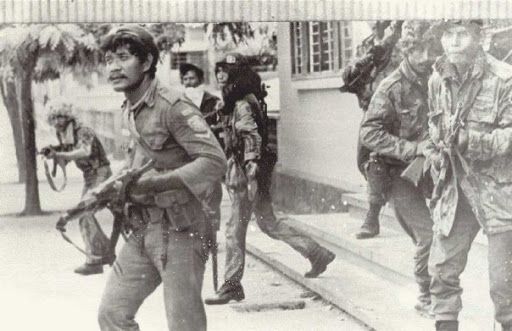 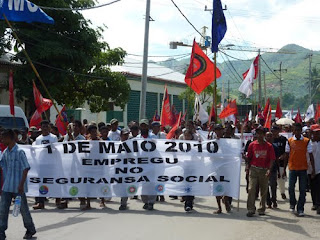 We are writing to urge you to support the East Timor and Indonesia Action Network (ETAN). As the Obama administration considers lifting all limits on military assistance to Indonesia, including the deadly Kopassus, we need to keep up the pressure. ETAN's strong and clear voice for justice and accountability is as crucial as ever.

We count on your financial support so we can bring out the facts, keep up the pressure and continue the fight for justice and democracy in East Timor and Indonesia.

Independent journalist Allan Nairn, speaking on Amy Goodman's Democracy Now! last month described how after the 1991 Santa Cruz massacre which they survived, "a grassroots movement grew up in the United States, including the East Timor Action Network, and we were all able to pressure the US Congress to cut off a lot of the military aid to Indonesia. That was under the dictatorship of General Suharto. And that cutoff had a huge effect within Indonesia."

ETAN won't rest on past victories; we will be working on the following in the coming months:

* providing an alternative perspectives when President Obama makes his delayed visit to Indonesia in June. We are preparing op-eds, fact sheets and other backgrounders. We are working with groups in Indonesia to raise important human rights issues and to oppose U.S. assistance to Indonesia's largely un-reformed military.

* working with groups in Timor-Leste (East Timor) and elsewhere to strengthen international support and expand activism for justice and accountability for war crimes and crimes against humanity during Indonesia's U.S.-backed occupation of Timor.

* actively opposing any U.S. plans to train Indonesia's deadly Kopassus special forces. Kopassus which stands accused of some of the worst human rights violations in East Timor, West Papua and elsewhere. Many of you signed ETAN's online petition petition expressing your opposition to this dangerous and illegal proposal.l.

* analyzing the impact of U.S. aid to Timor-Leste looking at the projects and their impact.

And look for us in late June in Detroit at the US Social Forum. ETAN is planning a workshop and will be tabling. If you are planning to attend, let us know and look for us there.

ETAN remains an important source of information and analysis to journalists, decision-makers and activists. We maintain an active presence online through our website, a blog, Facebook, e-mail lists, and Twitter. We actively monitor ongoing threats to human rights in both countries, applying pressure in defense of activists and others.

You can donate safely through ETAN's website here. Or you can mail your donation. To support ETAN’s political advocacy work, write a check made out to “East Timor Action Network.” For ETAN’s educational efforts, tax-deductible donations of over $50 can be made out to “A.J. Muste Memorial Institute/ETAN.” Please mail your donations to: ETAN, PO Box 21873, Brooklyn, NY 11202-1873.

P.S. Help put ETAN's finances on a firmer footing. Please consider making a recurring pledge of support via credit card to ETAN. You can choose the amount and frequency of the donation and it is automatically deducted from your credit card..
Posted by John at 10:44 AM No comments: