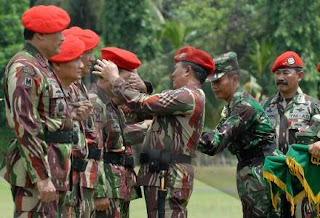 In today's Washington Post, Senator Leahy makes clear that he believes training Kopassus would violate the "Leahy Law" - he ought to know, he wrote it. The law prohibits security training for police or military officers or units with credible and unresolved involvement in human rights violations. Or as the Jakarta Post delicately puts it


Under the Leahy Law, the entire Kopassus unit is banned from receiving US military education or training, following allegations of their involvement in a number of atrocities in restive provinces. The law says the ban will only be lifted if the government takes adequate legal steps to process officers allegedly involved.


"We know there are some who favor resuming aid to Kopassus, but U.S. law requires the government of Indonesia to take effective measures to bring Kopassus members to justice," said Sen. Patrick J. Leahy (D-Vt.), who chairs the Senate Appropriations subcommittee on the State Department and foreign operations and wrote the Leahy Law.

Speaking about Obama's trip to Indonesia, which is scheduled to start March 20, Leahy said, "It would be a mistake to walk away now from an important principle that has been a consistent element of our policy through several U.S. administrations."

This contradicts statements in the Jakarta Post by Indonesia's former defense minister Juwono Sudarsono that Senator Leahy had come around.


The Obama administration's move reflects a desire to improve ties with Indonesia and other countries in Southeast Asia as part of efforts to counter China's rise.

Throughout its history Kopassus has largely been used for internal repression. I’m not sure what that has to do with balancing China in the region.

The West Papua Advocacy Team welcomes your upcoming visit to Indonesia as an opportunity to deepen U.S.-Indonesian ties and to encourage further democratization of Indonesia. Indonesia's democratic progress in the decade since the overthrow of the Suharto dictatorship has been impressive and has facilitated the expansion of U.S. cooperation with this important nation. Critical to Indonesia's democratization is the expansion of respect for human rights. Respect for human rights and the process of democratization generally continue to face threats from the Indonesian military which continues to evade full civilian control and remains largely unaccountable before Indonesia's flawed judicial system. It is imperative that the United States employ its not inconsiderable influence to work for the full subordination of the Indonesian military to civilian control and accountability before the law.

Nowhere in the Indonesian archipelago is military insubordination, corruption and abusive behavior more on display than in West Papua, where the military continues to operate in a manner that reflects the rules and practices fostered under the Suharto dictatorship.

Your visit affords an opportunity to press for genuine reforms and further democratization in Indonesia and specifically in West Papua where human rights abuse, injustice and security force corruption is endemic. Special Autonomy has not resolved the issues and is no final solution. Papuan human rights activists remain subject to intimidation, arrest and even death.

In your meetings with President Susilo Bambang Yudhoyono we urge you to pursue real reforms that reflect the agenda of issues raised by human rights advocates in West Papua. These include:
We also urge that you encourage the Indonesian President and government to respond positively to long-standing calls by the Papuan civil society and Papuan officials for

The United States played a central role in the process that saw West Papua annexed by Indonesia in the 1960s, a process that transparently failed to afford Papuans an opportunity to exercise genuine self determination. The period since then has seen continuing, extensive human rights problems. Democratization in Indonesia since 1998, and now your visit to that country, provide an opportunity for United States involvement in support of civil society efforts to solve some of the subsequent human rights problems.

Also in the March 2010 issue of the West Papua Report:

The East Timor and Indonesia Action Network (ETAN) today urged the Obama administration not to offer military assistance to Indonesia.

Testifying before a U.S. Senate committee this week (video), Secretary of  State Hillary Rodham Clinton talked about expanded cooperation with the Indonesian military, including in the area of counter-terrorism. The Obama administration is currently considering offering resumed cooperation with Indonesia's Kopassus notorious special forces when the President visits the country next month.


Clinton said while seeking to expand security cooperation "We are looking at ensuring... there is no resumption of any human rights abuses or other kinds of behavior that we deplore."

"Clinton's remarks imply that Indonesian military human rights violations are a thing of the past. They aren't," said Miller.
"The best way to prevent future violations is to hold accountable those responsible for the multitude of human rights crimes committed by the Indonesian military in East Timor (Timor-Leste), West Papua, and elsewhere. Many of these crimes occurred while the U.S. was most deeply engaged with the Indonesian military providing the bulk of its weapons and training," he added.
"While Indonesia has made progress in many areas since the fall of Suharto, reform of the military has stalled. The shedding of military businesses has become a farce. And the military continues to resist efforts to bring soldiers and former soldiers into court for rights violations," said Miller
"Restrictions on military assistance provide important leverage to encourage accountability and reform," he added.
Secretary of State Clinton also spoke about Indonesia's successful counter-terrorism efforts. In Indonesia, the police have the major role in this area. "U.S. support for greater Indonesian military involvement will only undercut the police, strengthen the military internal, territorial role and further undermine reform," he said.
"Working with the military on counter-terrorism means working with Kopassus," said Miller.
Read the rest >>>>>
Posted by John at 5:44 PM No comments: