View from Jakarta: The room was papered - literally - with signatures

JAKARTA  -- The room was papered - literally - with signatures.

The Setara Institute for Democracy and Peace convened a media conference of the Civil Society Coalition for Freedom of Religion/Conviction Thursday, May 23, at a Jakarta hotel. A wide range of NGOs, human rights organizations, and representatives of minority religious organizations - non-Sunni Muslims, Christians, "non-recognized" religious groups - gathered to express their opposition to the "World Statesman Award" that the New York-based Appeal of Conscience Foundation proposes to present on May 30 to Indonesian President Susilo Bambang Yudhoyono.

"No Award For SBY," an on-line petition by ETAN and another Indonesia-based one, were the visual symbols of broad, unified Indonesian and international opposition to the Foundation's choice: The walls of the room were covered with page after page of the names of signers, surrounding the 17 speakers, the TV cameras, print reporters, bloggers and interested others.

I met and spoke briefly with Imam Shofwan, a young journalist who grew up in a traditional Islamic political organization. He expresses deep offense at the idea of honoring SBY while religious violence is on the increase in Indonesia and the government refuses to enforce the rights of religious minorities.  Imam generated his own on-line petition, initially in support of an open letter by an Indonesian Jesuit professor of philosophy who wrote the Appeal of Conscience Foundation a painstakingly-worded critique of SBY's failures of leadership with regard to the protection of minority rights. Imam's petition, posted only a couple weeks ago, hit an instant chord in Indonesia. Signatures, now merged with those of ETAN's petition, total close to 6,000, says Imam.

"Some government spokespeople told me that Muslims are very angry at [the Jesuit Professor] Romo Suseno's letter, that this is a Muslin country and I shouldn't be supporting someone who speaks badly of us.  I told them to look at the 6,000 signatures!" Imam told me.

Among the speakers was an early ETAN activist, the Rev. Max Surjadinata, who attempted to meet with the Appeal to Conscience's president  during a recent visit to New York and deliver letters expressing opposition to the award from the GKI Yasmin and HKBP Filadelfia churches, which represent two of the more public recent examples of religious discrimination and violence in Indonesia.  Although he had been given an appointment upon phoning the Foundation, Max was rebuffed by security staff when he arrived at the door.  The guard took the letters, saying he would make sure they were delivered.

The Yasmin and Filadelfia congregations are still waiting for an answer. 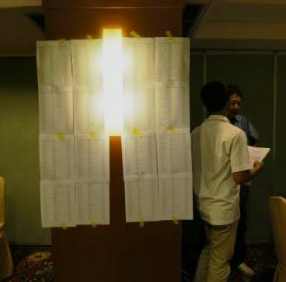 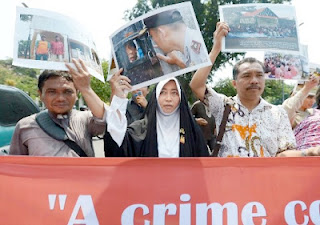 
JAKARTA, May 22, 2013 --  The announcement, just a couple months ago, that Indonesian President Susilo Bambang Yudhoyono (SBY)  would receive a not terribly prestigious award from a not particularly well-known U.S  foundation has generated unprecedented flap in this city.


The “World Statesman Award,” and the New York-based Appeal of Conscience Foundation that proposes to make the presentation on May 30 at a (what else?) gala fundraising dinner, evoke scarcely a sign of recognition among the general public almost anywhere – quite unlike, for example, SBY’s recent achievement of knighthood at the hand of the Queen of England, an honor with considerable international cultural resonance. The recognition by the Queen generated, in conversation among Indonesians, either enthusiastic approval or uproarious derision, but little else.

On the other hand, “Appeal of Conscience” and “World Statesman” have touched a nerve. 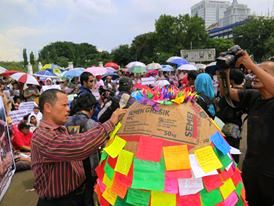 Easter Sunday in front of the Presidential Palace. Worshipers decorate
a giant Easter Egg with messages for SBY, hoping for a "resurrection"
of their right to Freedom of Religion!  (SBY refused the present.)

No day has gone by in recent weeks without a public statement or news release, a newspaper, TV, blog or other internet reference, and public demonstrations have included faces and voices, particularly religious ones, that seldom appear in public, still more rarely together.   Human rights activists, NGOs, Christians and Muslims are united in their effort to make the Appeal of  Conscience Foundation aware that it has made a grave mistake.


ETAN has joined the protest.
I recently attended  a service by the under-threat GKI Yasmin church.  One of the church leaders spoke about their ongoing effort to bring before the Appeal of Conscience the folly of its decision to promote SBY as a "statesman" of world renown, which gave me the opportunity to talk about ETAN's petition and other organizing endeavors, which received claps and cheers.

ETAN is circulating a petition opposing the award and plan a demonstration - should the award go ahead - for May 30 in New York City at the hotel where the gala will take place. 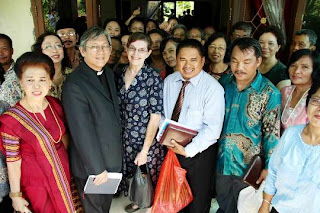 The GKI Yasmin congregation following worship on Pentecost Sunday.
Front row are the multilingual 'prayers' including yours truly.