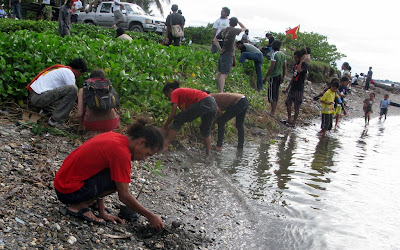 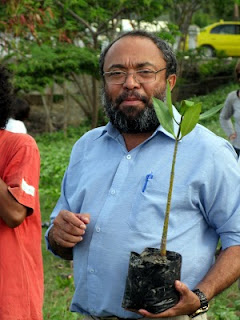 UPDATE: posted a revised version of Declaration. Copy-editing changes only.  Added photos from 10.10.10 action
Posted by John at 7:56 PM No comments:

UPDATE: On Wednesday, October 5, a Dutch court ruled against the request to issue an arrest warrant against SBY.

Indonesia's President Susilo Bambang Yudhoyono postponed a three-day trip to the Netherlands today, fearing arrest in a lawsuit that accuses him of sanctioning the abuse of Malukan political prisoners. SBY reportedly made the announcement after luggage had already been placed on the plane:


Officials and journalists had been assembled at an air force base before the departure and luggage had been loaded on to the jet before news emerged that the flight had been cancelled. (Sydney Morning Herald, "Malukan bid to have president arrested")

SBY speaks to press at Halim Perdana Kusuma airport in Jakarta October 5, 2010.
REUTERS/Presidential Palace-Adityawarman/Handout
SBY's  spokesperson said that a decision on the case during his visit could be "unpleasant for the honour of the president and this nation."


On Monday, Tempo Interactive reported that the was filed over the weekend by representatives of the pro-independence South Maluku Republic (RMS), in a district court in The Hague.  The plaintiffs asked that  SBY's diplomatic immunity be lifted and that he be arrested pending the outcome of the lawsuit.


In a statement, SBY said

The visit was to have been the first to the former colonizer by an Indonesian president in 40 years.

Human Rights Watch reports that up to 70-75 are in prison solely for exercising their right to peaceful expression of their views in the Malukus.

In 2007, the Indonesian police's Detachment 88 members arrested and tortured 22 civilians after they unfurled the Maluku independence flag in front of Indonesia’s President. Yusuf Sipakoly, who in 2007 was sentenced to 12 years for possessing a "separatist flag” recently died in prison. In August 2010, 12 activists were allegedly detained and tortured at the hands of Detachment 88 members. The activists had planned to "to float dozens of the distinctive rainbow flags attached to helium-filled balloons during Ambon's Sail Banda regatta" which Indonesia’s President planned to attend.
Posted by John at 10:18 AM No comments:

An historic U.S. Congressional hearing regarding West Papua revealed ongoing human rights abuse and impunity for the Indonesian military and broad Papuan rejection of Jakarta's failed policy of "special autonomy." The hearing also cast light on a U.S. policy that appeared not to have evolved to address the deteriorating conditions in West Papua or an unreformed Indonesian military intent on resisting accountability and civilian control. Subcommittee Chair Faleomavaega's description of "slow motion genocide" set the tone of urgency that enveloped the hearing. A senior State Department's prediction that migration and demographic trends would soon make Papuans a minority in their own land underscored that tone of urgency. A Pentagon representative cited reforms scored a decade ago to justify recent expansion of U.S. military assistance to the Indonesian military. The hearing heard a Papuan call for a Jakarta-Papuan dialogue about Papua's political future and an end to U.S. support for an unreformed Indonesian military.

In other developments, Indonesian security forces killed two Papuans and wounded a third in Manokwari. The victims were a religious leader, his son and his wife. Non-judicial, administrative sanctions against those responsible were shockingly light. A prominent Papuan academic has welcomed the presidential decision to undertake an audit of "special autonomy" fund flow to West Papua, but lamented the reality that the funds have been unaudited over the past decade.