Activists in Dili send a message to Australia about its theft of Timor's resources. 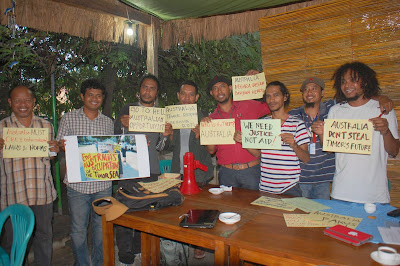 The photo within the photo is from an East Timor and Indonesia Action Network
demon at the Australian Embassy in Washington, DC in 2004. The struggle continues!

Read from the statement of the Timor-Leste based Movement Against the Occupation of the Timor Sea:

Today, the Movement Against the Occupation of the Timor Sea asks the Government of Australia to:
1. Stop stealing and occupying the Timor Sea, but show your good will as a large nation which
follows democratic prniciples to accept a maritime boundary which follows international law
principles.
2. Australia should set an example as a sovereign nation which respects and recognizes the
rights of Timor-Leste’s people.
3. Australia should not promote or continue neocolonialism against Timor-Leste’s people, who
have suffered this for centuries. We will no longer be your slaves.
4. The Abbott government should apologize to the Maubere people, who have been hugely
discriminated against by Australia from the past to the present. If not, we will continue to
demonstrate at the Australian Embassy for the indefinite future.

Background from Lao Hamutuk is here and from ETAN here.
Posted by John at 7:40 PM No comments:

Mandela, Indonesia and the liberation of Timor Leste

Nelson Mandela took on Suharto in his own house. He demanded to meet with imprisoned East Timorese leader Xanana Gusmao during a 1997 visit to Jakarta. Mandela insisted that the meeting take place outside the prison.

From Mandela, Indonesia and the liberation of Timor Leste | The Jakarta Post:


"Unlike many, Mandela remains loyal to the principles of Bandung that included the right to self-determination. Indeed, contrary to leaders of Indonesia’s New Order, he threw his full weight behind the liberation of Timor Leste."

"The defining moments for Mandela and Xanana were at the expense, slowly but surely, of Soeharto."

In this edition's "Perspective," Dr. Charles Farhadian describes the transformation of the religious landscape of West Papua, in particular the role of the Indonesian government in the shift of the region from predominantly Christian to predominantly Muslim.

This month's "Update" leads with the police crackdown on West Papuan demonstrators which left at least one Papuan dead, many injured and many under arrest. WPAT sources in Papua New Guinea report that Papuan rights supporters foiled efforts by national police to arrest Port Moresby Governor Powes Parkop for flying the Papuan Morning Star Flag on December 1. Two reports look at the mining giant Freeport McMoRan, including its "greenwashing" activities. Moana Carassas, Prime Minister of Vanuatu, raised the plight of the people of West Papua at the Commonwealth Heads of Government meeting in Sri Lanka. A prominent Indonesian journalist called for greater transparency by the Indonesian government in dealing with West Papua.  A regional journal reports on West Papuan activists in carrying their message to the nations of the Pacific.

In "Chronicle," we note condemnation of recent police violence in West Papua by Amnesty International and the West Papua Advocacy Team. The impact of the recent "Freedom Flotilla" is considered in a comprehensive essay. West Papuan voices are largely absent in the ongoing reconsideration of special autonomy for West Papua.  An OpEd by ETAN board member Andrew de Sousa looks at the role of the "School of the Americas" in training military officials who have notorious human rights records. A regional conference examined policing practices.