ETAN Urges Justice for Munir on 12th Anniversary of Assassination 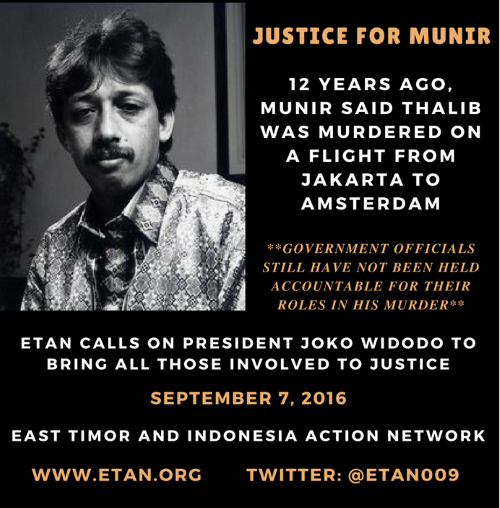 ETAN Urges Justice for Munir on 12th Anniversary of Assassination

September 7, 2016 - On the 12th anniversary of the murder of Munir Said Thalib, a prominent Indonesian human rights activist, the East Timor and Indonesia Action Network (ETAN) urged U.S. Secretary of State John Kerry to press “President Widodo to fully investigate Munir’s murder and hold accountable all those responsible for his death.”

The group wrote “that resolving the case is important to consolidating Indonesia’s democracy.”

See also ETAN Backgrounder: The Investigation of the Murder of Munir: Timeline and Recommendations
Posted by John at 8:13 AM No comments: