November 5, 2010 - As President Obama departs on his twice-delayed trip to Indonesia, the East Timor and Indonesia Action Network (ETAN) urge him to use the opportunity to build a relationship between the U.S. and Indonesia based on the promotion of human rights and the rule of law.

As we wrote to President Obama last March, "the history of U.S.-Indonesia relations is much better known for the U.S.'s largely uncritical support of the Suharto dictatorship, from its bloody seizure of power in 1965 through its illegal invasion and occupation of then Portuguese Timor to the Kopassus kidnappings and murders of student leaders in 1997 and 1998."


President Obama's visit coincides with Indonesia's Heroes Day, and the dictator Suharto is under consideration to be named as a "National Hero." We urge President Obama to use the opportunity of his visit to decisively break with past U.S. support for torture, disappearances, rape, invasion and illegal occupation, extrajudicial murder environmental devastation. and more. U.S. weapons, training, political backing and economic support of Indonesia facilitated these crimes. President Obama should apologize to the peoples of Indonesia and Timor-Leste for the U.S. role in their suffering during the Suharto years and to offer condolences to Suharto's many victims throughout the archipelago.

Crimes against humanity and other violations of human rights did not end with Suharto’s fall. Since then U.S. policy has largely focused instead on narrow strategic and economic interests that have little to do with the well-being of the Indonesian people. In recent weeks,horrific videos and other reports of torture, the burning of villages and other crimes show that the people of West Papua and elsewhere continue to suffer at the hands of military and police.
We urge President Obama to condition U.S. security assistance on an end to human rights violations and impunity. We urge him to follow the recommendation of Timor-Leste's Commission for Reception, Truth and Reconciliation in Timor-Leste (CAVR), which urged nations to "regulate military sales and cooperation with Indonesia more effectively and make such support totally conditional on progress towards full democratisation, the subordination of the military to the rule of law and civilian government, and strict adherence with international human rights, including respect for the right of self-determination."


We urge the President to announce that the U.S., as a permanent member of the UN Security Council, will work to establish an international tribunal to bring to justice the perpetrators of human rights crimes committed during Indonesia’s 24-year occupation of Timor-Leste. This would send the critical message that no one is above the law and would serve as an important deterrent to future human rights violators. A tribunal was recommended by the CAVR and is supported by the many victims of these crimes and by human rights advocates in Timor-Leste, Indonesia and elsewhere.

We are deeply concerned about the administration's recent announcement that the U.S. will for the first time in a dozen years engage with Indonesia's notorious Kopassus special forces. We also call on President Obama to end this planned engagement and to suspend all funding and training of Indonesia's Detachment 88 police unit pending review of charges leveled against the unit for systemic human rights violations, including use of torture. We believe that U.S. law bars cooperation with military and police units with such egregious human rights records.

These actions by President Obama would change the current course from one of repeating failed policies. While much has changed in Indonesia, U.S. security assistance does not promote further change. Instead it encourages impunity and violations of human rights and sets back reform.


In his book The Audacity of Hope, President Obama wrote that "for the past sixty years the fate of [Indonesia] has been directly tied to U.S. foreign policy," a policy which included "the tolerance and occasional encouragement of tyranny, corruption, and environmental degradation when it served our interests."


A new relationship between the two countries must be built on an honest assessment of the bloody past. President Obama's special connection to Indonesia offers an important opportunity to usher in a new era in the relationship between our two nations. One that rejects a relationship based largely on militarism with one that respects human rights and promotes the rule of law.
-30-
Members of ETAN are available for interviews

Two East Timorese are running in the New York Marathon on Sunday, November 7, and ETAN plans to cheer them on.

We plan to meet up at the corner of 4th Ave. and Bergen St. in Brooklyn at 10 am to wave Timor flags and otherwise show our support. By gathering at 10 (don't forget to change your clocks the night before to end daylight savings) we will have time to find it other and get settled before the Timorese runners pass by. (Nearest subway is Pacific St/ Atlantic Ave.)
Call 917-690-4391 if you can't find us. 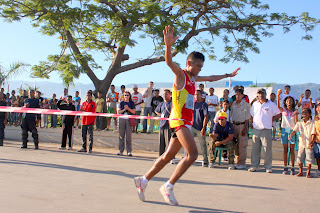 Two of Timor's top runners are participating: Augusto Ramos (race number 279) and Olympic veteran Agueda Amaral (213). Augusto came in second in Dili's first Marthon for Peace in June. Agueda represented not-yet-independent East Timor (Timor-Leste) in the 2000 Olympic games in Sydney. CNN described her arrival in the stadium for the final laps as "the most moving moment" of the race. She also ran in the 2004 Athens games.

More information about Timor's participation in the NY Marathon can be found here.

West Papua Advocacy Team: Open Letter to President Obama on The Eve of His Visit to Indonesia

The West Papua Advocacy Team welcomes your upcoming visit to Indonesia as an opportunity to deepen U.S.-Indonesia ties and to encourage further democratic progress in Indonesia. This progress has been impressive in the decade since the overthrow of the Suharto dictatorship and has facilitated the expansion of U.S. cooperation with this important nation.

The United States maintains significant influence with Indonesian military, due in large measure to the Indonesian military's long-standing desire for U.S. training and equipment.  It is imperative that your administration employ this influence as leverage to promote the full subordination of the Indonesian military to civilian control and accountability before the law. The recent decision to renew contact with the notorious Indonesian Special Forces (Kopassus) and continued U.S. support for Detachment 88 ignore numerous credible reports of human rights abuse and unaccountability before the law by both organizations.
This policy of support for Indonesian forces acting criminally and with impunity sabotages the courageous efforts by Indonesian NGOs and citizens, who often face intimidation as they work to secure fundamental reform of all the Indonesian security forces.

Nowhere in the Indonesian archipelago is military insubordination, corruption, abusive behavior and unaccountability more on display than in West Papua, where the military continues to operate in a manner that reflects the rules and practices fostered under the Suharto dictatorship. Papuan human rights activists face  intimidation, arrest, torture and extra-judicial execution.

Recently, the international community has been shocked by graphic video footage of Indonesian security personnel torturing Papuan civilians. Less than ten days before your scheduled arrival in Jakarta a cyber attack was launched against international websites that carried the video. The resources required for such an attack indicate that elements within the Indonesian government were behind it. This is in line with determined Indonesian government efforts to prevent the international community from monitoring developments in West Papua.

Also in recent weeks, Indonesian security forces destroyed the Papuan village of Bigiragi. For decades, especially in the Puncak Jaya region, security force "sweeping operations" have driven villagers into the surrounding mountains and forests where hundreds have died due to lack of access to food, medical care and adequate shelter. Security force refusal to allow humanitarian relief to these displaced civilians has exacerbated their plight.
Read the rest >>>>>
Posted by John at 11:47 AM No comments:

In a few days, President Obama is expected to leave for a trip to Asia, including a several-times postponed visit to Indonesia where he lived as a boy. Letters to the editor are often the most widely-read section of newspapers, especially by decision-makers. Try to keep your letter to about 200 -250 words and be sure to include your full name, address, and telephone number when submitting the letter to the newspaper. If possible, include a local angle or directly respond to an article or opinion published in the paper. The more timely your response, the more likely it is to be published.

Contact us at etan@etan.org or 718-596-7668, if you would like some help with your letter. Please send us copies of your letters, published and unpublished.

Adapt, mix and match the text of the 3 updated sample letters below. Use it in responses to online posting of articles and in blogs. Adapt the letters to your own words. Please check http://etan.org/action/letters/obama2010.htm for additional letters as events develop.


Summary: A video of Indonesian security forces torturing Papuan civilians again revealed the routine violence employed by these forces to terrorize the Papuan people. Calls for a genuinely independent and credible investigation of the incidents appear to be in vain as the Indonesian Government has stated that the security forces will investigate themselves. Within days of the video's release a massive cyber attack took down many of the international NGO websites which had posted the torture video footage. Analysts assessed that the cyber attack's sophistication and coordination indicated that it was the work of a govern. While international NGO's condemned the torture unequivocally and demanded a credible investigation of the incidents, the U.S. sought to downplay the matter, commending the Indonesian security forces for acknowledging that their personnel were implicated. In a separate incident, video revealed that Indonesian security forces burned a Papuan village. The passing of Asmara Nababan removes a courageous and articulate human rights advocate from the Indonesian scene. In separate comments WPAT criticizes the U.S. administration for its "limp" response to the evidence of security force torture and for resisting calls to make an end to such abuses, real accountability for their perpetrators, and genuine reform a sine qua non for U.S. military-to-military assistance. WPAT also notes that cyber attack against websites that posted the torture video footage is consistent with the Indonesian Government's long-standing efforts to prevent international monitoring of developments in West Papua.