UPDATE: Read U.S. Congressman Faleomavaega's letter to the Indonesian ambassador, which concludes "It is obvious the actions by the TNI and police are contrary to the commitments made by President Yudhoyono to solve the issues in West Papua in a 'peaceful, just, and dignified manner.'"

ETAN joined others in two recent statements on events in West Papua.


With Tapol and the West Papua Advocacy Team (WPAT), ETAN condemned the assault on the close of the peaceful Third Papuan Congress. The groups demanded the release of those arrested. The release - Indonesian crackdown on Papuan Congress sparks outrage - also included comments from Lord Avebury, Vice Chair of the UK Parliamentary Human Rights Group and U.S. Congressmember Eni Faleomavaega (D-AS). Tapol's  Carmel Budiardjo said "The daily discrimination and violations experienced by Papuans are bad enough, but an attack of this nature on a democratic congress is an absolute outrage. ETAN is quoted as saying “The right to gather and speak out is a fundamental freedom, it doesn’t just disappear because the government doesn't like what is being said.”

Events are still unfolding with new information that at least six were killed in the Indonesian security force attack.

In a separate statement WPAT and ETAN, expressed concern over


"the escalating violence in the area of [Phoenix, Arizona]-based Freeport McMoran's massive gold and cooper mining operation located in the Timika-Tembagapura area of West Papua. Workers have been on strike since September 15 seeking higher wages on par with those that Freeport pays workers at its mines elsewhere. Freeport's response has been to stonewall, reject worker demands, and hire scab workers."

The groups said the U.S. government


should publicly emphasize its commitment to respect for worker rights in the context of the ongoing labor dispute. It should urge Freeport to negotiate in good faith with its workers. It is urgent that the U.S. government press the Indonesian government to forego the use of violence in addressing the current tensions in the area of the mining operation. The U.S. government also should investigate Freeport operations, especially actions taken by security forces at Freeport's behest to date. Finally, it is high time that the U.S. Congress undertake, including through committee hearings, a review of Freeport operations which have for decades undermined respect for the United States in Indonesia and West Papua. 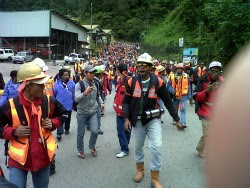 UPDATE: Three more were shot dead at the mine on October 21.
Posted by John at 11:19 AM No comments: