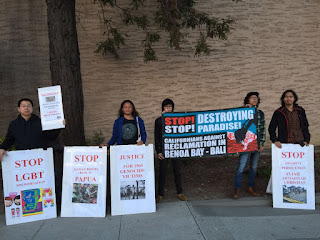 Made Supriatma is an independent scholar and regular contributor to IndoProgess.

Feb. 16, 2016 - Today, President Jokowi visited the city of San Francisco. He was in the United States to attend a consultation meeting between the government of the United States and ASEAN. The meeting was held in the city of Palm Springs. Jokowi then took time to stop in San Francisco, possibly to make up for his failure to pay a visit to the West Coast during his visit to the U.S. last year. At that time, he shortened his visit due to catastrophic wildfires.

This afternoon, he met with the people who are members of an organization called Diaspora Indonesia. There was also a protest on that occasion. They raised posters that shouted their concerns about some of the issues that should be considered by the president. One banner urged him to "Reject Reclamation Benoa Bay." Other issues included  human rights violations in Papua, the oppressed religious minorities such as Ahmadis and Shias, and the LGBT issues that are now emerging. Incidentally, San Francisco is the one of the most tolerant and supportive cities in America for LGBT people and their struggles.

The President and his aides who participated in the visit might have been surprised, wondering why local issues such as "Reject Reclamation Benoa Bay" sail away to the United States? That's because this issue is no longer a local issue. It is an international matter.

I just heard some stories that did  preoccupy the president's entourage. A few days before his arrival, consular officers were busy contacting comrades planning the protest. They even send SMS messages saying, "Boss, there were guests from Jakarta who want to see you. Let's coffee-coffee."  The Jakarta "guests" were from BIN (Indonesia's intelligence bureau). Brothers and sisters, you know it would be the greatest stupidity on the face of this earth to want to have coffee with the BIN! Is not it? Remember the case of Munir, who was poisoned cowardly when invited to drink coffee? Ha, that's him ...

During the action Jokowi's entourage did other annoying things, Officers from Paspampres (presidential security force) tried to  prohibit the demonstration in front of the venue. What happened? San Francisco local police intervened, saying the demonstrators had a permit. This is America! Not Indonesia! Paspampres retreated.

I think as a matter of free speech we suffered a setback at the time of Jokowi's visit. I remember the [September 2012] demonstration against SBY in New York . Indonesian spies did not dare to approach. They just take photos from across the street. They did organize a counter demonstration and accused us of being paid protesters. This accusation was met with a very sweet by John M. Miller, ETAN coordinator, "We do not rent the crowd here in the U.S., but we do not mind to take your money. ETAN needs money for campaigning."
Intelligence was contrived to provide an early warning about the opponents of foreign states and countries, especially those who would undermine the existence of the state, not to silence opposition or pressue those who disagree with the government to change their minds. Jokowi, I think government should be reminded of that.

My honeymoon with Jokowi's reign is over. I wait for you in New York, Mr. President! 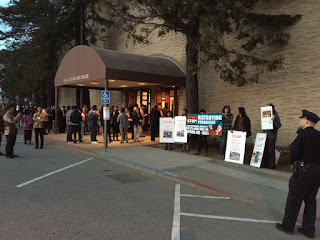 Demand President Jokowi Support Justice for All in San Francisco

Indonesia's President Joko "Jokowi" Widodo is back in the United States for the US-ASEAN Summit Meeting near Palm Springs, CA. On February 16, President Jokowi will meet and address Indonesians in San Francisco before touring Silicon Valley hi-tech companies.
This trip will be all about business. Jokowi was elected with the promise that his administration would be different. He has yet to fulfill this promises on human right and many other issues. Positive initiatives by President Jokowi have been undermined by his own officials and many important issues, such as justice and accountability for past human rights crimes, have not been seriously addressed. Please join us on February 16 as we break the silence and demand that President Jokowi seriously address the following issues:

1. Indonesia must reveal the truth and provide justice for past human rights violations from the mass killings in 1965 on to the illegal invasion and occupation of East Timor
It is 50 years since Suharto's 1965 seizure of power and 40 years after Indonesia's illegal invasion of East Timor (Timor-Leste). During Suharto's decades in power, Indonesian security forces and their proxies killed hundreds of thousands. Indonesia has taken only halting steps to acknowledge these crimes against humanity and has yet to take serious steps to hold those responsible for the crimes committed throughout the archipelago from Aceh to Timor-Leste (East Timor) to West Papua. Many of those responsible maintain powerful positions, including in Widodo's own political party and administration. Refusing to acknowledge the past, the Indonesian military is increasingly re-inserting itself into domestic affairs.

2. End the Persecution of Religious Minorities

Religious minorities in Indonesia remain under threat. The recent burning of churches in Aceh and bans on Ahmadi worship are among the most recent examples. Followers of minority religions continue to face persecution and to have trouble opening houses of worship, including GKI Yasmin and HKBP Philadelphia churches. Many localities enforce discriminatory regulations in violation of national law.

Public officials have made a series of troubling anti-gay statements, urging barring LGBT people from universities and other institutions. Recently, the Communication and Information Ministry threatened to ban gay and lesbian emoji or stickers in WhatsApp, Facebook andTwitter.

While Jokowi has promised a new deal for Papua, many of those promises remain unfulfilled. About 40 political prisoners remain in jail and the rules governing media access remain murky. West Papuans advocating for freedom face harassment, arrest or worse. Expanded "development" projects threaten indigenous rights and livelihoods. Indonesia continues to rebuff appeals for direct dialogue with the independence movement.

Indonesia's forests continue to be stripped to establish palm oil and other plantation agriculture. The rate of deforestation is among the worst in the world. Illegal logging is often facilitated by lax enforcement and corrupt military and police. Haze from the seasonal burning of forests in Indonesia affects the health and well-being of millions in several Southeast Asian countries. Plans to add additional coal-fired electric plants also pose health hazards and will contribute to climate change that already threatens Indonesia's coral and coasts. The massive Benoa Bay Reclamation Project would destroy a large conservation area in Bali for hotels and tourism.