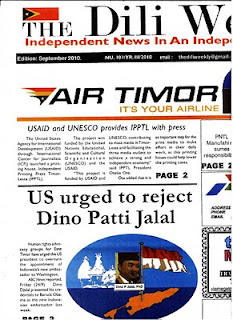 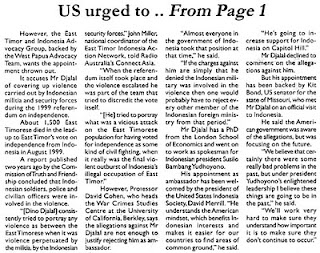 September 29, 2010 - The East Timor and Indonesia Action Network (ETAN) and West Papua Advocacy Team (WPAT) today urged that the U.S. government to suspend all funding and training of Indonesia's Detachment 88 police unit pending review of charges leveled against the unit for systemic human rights violations, including use of torture.

"U.S. funding and training should not go to a security force that has repeatedly and credibly been charged with human rights violations including torture of those engaged in peaceful dissent," said WPAT's Ed McWilliams.

"Indonesian authorities have consistently failed to prosecute Detachment 88 personnel for these widely reported abuses," he added.

"Detachment 88 has been funded and trained by the U.S. from its inception. With that history, how can anyone believe that U.S. assistance will improve the human rights behavior of other units, like Kopassus," said John M. Miller, National Coordinator of ETAN.

"While the reported withdrawal of Detachment 88 from the province of Maluku will end its persecution of peaceful protesters there, we are concerned that the unit will continue to operate in West Papua," said McWilliams. "We urge the Indonesian government to stop treating pro-independence activists as terrorists and to deal with the underlying issues."

Indonesian and international non-governmental organizations and media regularly report on the counter-terrorism police unit's brutal methods, including torture against nonviolent protesters and suspects.

In addition to suspending assistance to Detachment 88, ETAN and WPAT urge:

Detachment 88 (Densus 88) was created by the Indonesian government statement in 2003 with the assistance and encouragement of the U.S. Government. The U.S. State Department's Diplomatic Security Services used funds appropriated under the Anti-Terror Assistance Program to support the initiative, which was in response to the 2002 Bali bombings. In addition to providing funding for the unit, the U.S. government has trained its personnel, drawing on the resources of various agencies.

Though the unit has drawn praise for its successful actions against small numbers of militants, it has also gained a reputation for brutality in its more than 500 arrests, including allegations of torture.

The unit has increasingly been used by the Indonesian government in its suppression of separatist activities around the country. In 2007, Detachment 88 members arrested and tortured 22 civilians after they unfurled the Maluku independence flag in front of Indonesia's President. Yusuf Sipakoly, who in 2007 was sentenced to 12 years for possessing a "separatist flag" recently died in prison. He had told the Sydney Morning Herald: "I was tied with nylon [by the Detachment 88 officers] and my head was covered with a bucket," he said. "Then they started beating me until I urinated in my underwear..."


The Herald also reported that the United States had secretly banned some Detachment 88 members in Maluku from receiving assistance in May 2008 because of concerns over human rights violations. However, abuses continued. In August 2010, 12 activists were allegedly detained and tortured at the hands of Detachment 88 members. The activists had planned to "to float dozens of the distinctive rainbow flags attached to helium-filled balloons during Ambon's Sail Banda regatta" which Indonesias President planned to attend. Following an outcry, the unit was disbanded in Maluku in September, but the unit's commander Brig. General Tito Karnavian has said that the unit will stay in Papua.

In April 2010, members of Detachment 88 detained 28 West Papuan activists for organizing a peaceful demonstration in Manokwari. Some of these detainees were sentenced to three and three and a half years in prison for talking about freedom and for holding a Morning Star Flag. In December 2009, Detachment 88 personnel shot Papuan independence figure Kelly Kwalik, allowing him to bleed to death without medical intervention. On October 18, 2007, the prominent Papuan human rights lawyer Iwanggin Sabar Olif was arrested by Detachment 88 on charges of "incitement of hatred and rebellion," after forwarding a text message to colleagues criticizing the Indonesian President and military. The U.S. reportedly provided Detachment 88 with the technical capacity and other support to intercept SMS and possibly other messages among civilians.

The U.S. government has paid for training costs, instructors' salaries, weapons and wire tapping devices. For example, as of late 2005 Washington had provided at least $12 million for Detachment 88 for training an initial 400 officers. Australia has also provided substantial aid to the unit. In 2004, Australia pledged US$35 million over five years for Indonesia to build a training center.

One Indonesian legislator has warned that "We have to be really careful about [Detachment 88] because we don't want anyone to turn the clock back to the old days when Kopassus got training in the U.S. and tortured their own people when they're back home.''

The Indonesian government has recently announced the creation of an umbrella organization, the National Antiterrorism Agency (BNPT), to coordinate the actions of the National Police, especially Detachment 88, the Indonesian military, the State Intelligence Agency, and the Ministry of Religious Affairs. There are concerns that this new agency's scope will broaden to target to not just terrorism suspects but "separatist" activists as well, as well as deepen the military's controversial internal security role.

The National Police have now put Detachment 88 under direct control of the National Police chief, General Bambang Hendarso Danuri. Over the weekend Danuri said "Please understand that our officers, particularly those of Densus 88, have never violated human rights in the course of their duty."

ETAN was formed in 1991 to advocate for self-determination for occupied East Timor. The U.S.-based organization continues to advocate for democracy, justice and human rights for Timor-Leste and Indonesia. For more information, see ETAN's web site: http://www.etan.org. The West Papua Advocacy Team produces the monthly West Papua Report.
Posted by John at 6:22 PM No comments:

The preliminary transcript of the House of Representatives Asia subcommittee historic hearing on  Crimes Against Humanity: When Will Indonesia's Military Be Held Accountable for  Deliberate and Systematic Abuses in West Papua is available on ETAN's website.


The hearing was held on Wednesday, September 21, 2010 by the Asia, the Pacific and the Environment Subcommittee of the House Committee on Foreign Affairs.


Ed McWilliams was unable to attend but submitted a written statement. 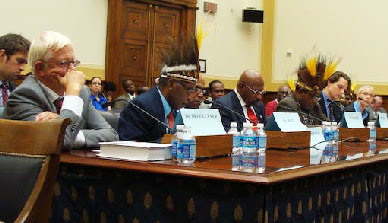 photos by John M. Miller/ETAN
The hearing was chaired by Del. Eni Faleomavaega: 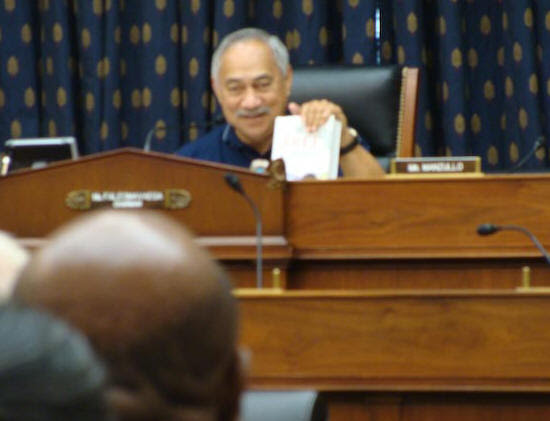