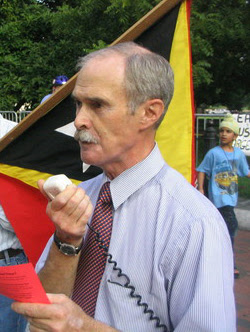 "ETAN's work is unique and essential at this critical time. It needs and deserves your support." - Ed McWilliams

Email ThisBlogThis!Share to TwitterShare to FacebookShare to Pinterest
Labels: ETAN

Henry Kissinger's callousness about mass murder should come as no surprise to anyone who has followed his career. Kissinger appears on a recently released tape of a conversation with  then-President Richard Nixon saying in 1973:


"that helping Soviet Jews emigrate and thus escape oppression by a totalitarian regime — a huge issue at the time — was 'not an objective of American foreign policy.'
'And if they put Jews into gas chambers in the Soviet Union,' he added, 'it is not an American concern. Maybe a humanitarian concern.'

Just a few years later, in December 1975, Kissinger and President Gerald Ford were in Jakarta giving the go ahead to Indonesia's invasion of East Timor. Kissinger would guarantee continuation of weapons shipments. According to Timor-Leste's Commission for Reception, Truth and Reconciliation as many as 180,000 people died as a result.  For more on Kissinger's role in East Timor click here.
Posted by John at 5:25 PM No comments:

Dear Representative Kennedy,
As the Executive Committee of the East Timor and Indonesia Action Network, we write to wish you the best in your post-Congressional career and to express our deep gratitude for your tireless work in solidarity with the people of East Timor and Indonesia during your 16-year tenure in the U.S. House of Representatives. Over those years, we have greatly valued our collaboration with you, as you initiated numerous congressional letters, resolutions and legislation to protect and promote human rights in the region. It is heartening to see a public servant work so tirelessly in support of justice and the rights of others, not for personal gain or public acclaim but simply because it is the right thing to do.
Shortly after your arrival in Washington, you established yourself as one of the key House leaders on human rights and related issues in Indonesia and East Timor. You visited East Timor in 1996 to support Bishop Belo on his return to his homeland after he received the Nobel Peace Prize. In 1997, you introduced bold and important legislation – the Indonesia Military Assistance Accountability Act (HR 1132) – baring government-to-government weapons sales and some military training until critical human rights improvements in East Timor and Indonesia were achieved.
Indonesia’s President Suharto underscored the efficacy of your work in the House in an angry letter to President Clinton shortly after the bill’s introduction, canceling a planned purchase of nine F-16 planes from the US government and withdrawing from participation in the Expanded International Military Education and Training (E-IMET) program.
The introduction of HR 1132 is only one among many examples of your leadership in Congressional efforts to maintain and expand restrictions on arms sales and military training for Indonesia – efforts that put Indonesia on notice that international support for their illegal occupation of East Timor was beginning to crumble.  In 1998, you lead efforts which placed the U.S. Congress firmly on record as supporting self-determination for East Timor.
Over time, your efforts gave critical support to the broad-based pro-democracy movement that ended the reign of the Indonesian dictator Suharto and helped enable East Timor’s historic referendum for independence in 1999.
Over the ten years since East Timor’s independence vote, you have demonstrated your commitment in support of a strong and stable East Timor (Timor-Leste). Throughout the 2000’s, you continued to shine a spotlight on events in East Timor. You urged your colleagues and the administration to strongly support the UN mission as the country continued to rebuild during its transition to full independence. You advocated for meaningful U.S. assistance to East Timor and supported its demand for its rightful share of natural resources in negotiations with neighboring Australia. You have also been outspoken in your support for justice and accountability for the many atrocities and crimes against humanity committed by U.S.-backed Indonesian forces during the occupation.
Finally, we are appreciate for your efforts to draw attention to the human rights crisis in West Papua through among other initiatives, your recent sponsorship of HRes 1355, calling for the release of political prisoners and greater access for international organizations to West Papua. We know that this issue remains particularly important to you and we hope we can continue to work together to ensure justice and peace for the people of West Papua as you enter this new chapter of your life and career.
Wishing you all the best in this holiday season,
Sincerely,
John M. Miller, National Coordinator
For ETAN
Posted by John at 11:27 AM No comments: