The year of human rights paradox for Indonesia 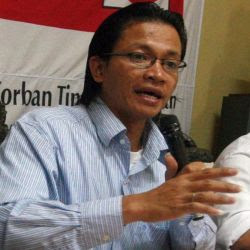 Usman Hamid of KontraS looks back at Indonesia's year in human rights in today's Jakarta Post.

He writes that there are "improvements that need to be appreciated,


including the parliamentary decision "that recommends the President Susilo Bambang Yudhoyono establish an ad hoc human rights court for enforced disappearance cases, including finding the fate and the whereabouts of missing persons, to provide rehabilitation and compensation to the victims and their families and to ratify the United Convention Against Enforced Disappearance."


These changes don't balance the ledger:  the "achievements were nothing compared to the stagnation of justice concerning other important human rights violations, including the acquittal of former Commander of Army’s Special Forces and Deputy V of State Intelligence Agency Muchdi P.R.in the murder of human rights defender Munir."

He writes that "the situation in Papua is also deteriorating... could worsen if there is no genuine dialogue between the central government and representatives from Papua."


In the context of legislative and institutional reform, the government and the parliament didn’t even meet the targets in the National Action Plan on Human Rights 2004-2009 that includes the ratification of the Rome Statue and several other conventions on migrant, genocide and refugees.

Furthermore, the parliament and the executive have failed to revise the law on military tribunals, where the police has been blocked from investigating crimes committed by military personnel.

By having this law, soldiers will continue to enjoy impunity in the future."


Read the full article here
Posted by John at 9:59 AM