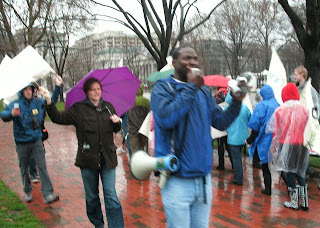 The East Timor and Indonesia Action Network today participated in a demonstration called by Amnesty International in support of Filep Karma and Yusak Pakage, political prisoners held by Indonesia for waving the Morning Star flag in a 2004 West Papuan independence rally. Approximately twenty people spent almost two hours rallying in the rain in Lafayette Park across from the White House. Speakers included Folabi Olagbaju of Amnesty International (featured above) and Karen Orenstein of the East Timor and Indonesia Action Network (featured below). 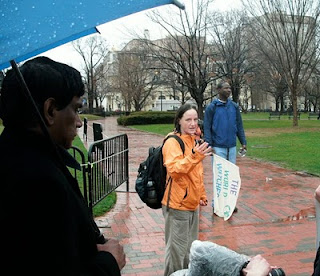 With the release of Karma and Pakage at the center of the rally, activists also called for halting U.S. plans to again train Kopassus, the notorious Indonesian special forces who have a long-record of human rights violations. ETAN has been in the press of late for its comments against re-engaging Kopassus (see post from March 11th below),  and more than 1500 people have signed ETAN's petition against re-engaging Kopassus.

The Obama administration is expected to announce a renewal of relations with Kopassus during the president's upcoming trip to Indonesia, which begins March 21st. Reportedly, high-level Kopassus officers recently met with administration officials in Washington in the lead-up to Obama's trip to discuss renewed relations. Recent ETAN comments against military relations with Indonesia can be found here, and comments specifically regarding Obama's trip and re-engagement with Kopassus can be found here.
Posted by John at 12:59 AM