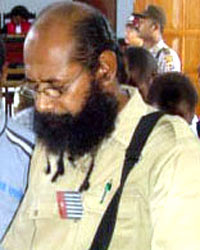 Representative Joe Pitts and Jim Moran are circulating a letter to President Susilo Bambang Yudhoyono of Indonesia concerning the case of political prisoner Filep Karma, a prominent Papuan advocate of self-determination. Karma has been serving a 15-year sentence for raising the Papuan Morning Star flag at a peaceful political rally in 2004. Karma is designated a Prisoner of Conscience by Amnesty International for his nonviolent advocacy.

This bi-partisan initiative is currently circulating in the House of Representative. Please call your Representative this week and urge him or her to sign the letter.

Call the Capitol Switchboard (202) 224-3121. Ask for your congressperson's foreign policy aide. Ask that your representative sign on to Representative Joseph Pitt's and Jim Moran's letter to Indonesia's President concerning the case of prisoner of conscience Filep Karma. Urge them to support human rights and the rule of law  in Indonesia. Offer to e-mail them a copy of the letter. Tell them that if your Representative wishes to sign, she or he should contact Carson Middleton 52411 in the office of Rep Pitts. The deadline is Friday, August 12, so call soon.
If necessary leave a detailed message. If you have trouble getting through by phone send an e-mail to the office, but be sure to follow up with a call.
Thank you for your support.
To find out who your representative is go to http://house.gov/

The letter is an initiative of Freedom Now, who represent Karma pro-bono. Please let us know the results of your call.

The Honorable Susilo Bambang Yudhoyono
President of the Republic of Indonesia

As Members of the House of Representatives of the United States Congress, we write asking your government to release Filep Samuel Karma, a Papuan political activist and former civil servant, who has been unlawfully and arbitrarily detained since 2004. Mr. Karma is a prominent non-violent Papuan political activist. He is currently serving a 15-year prison sentence following his raising of the Papuan Morning Star flag at a 2004 political rally celebrating the 1961 Papuan declaration of independence from Dutch rule.

Mr. Karma's trial violated international standards of due process of law. For example, the judge made several plain statements indicating a bias against Mr. Karma. Additionally, Mr. Karma's appeal was rejected on unfounded procedural grounds. And during his incarceration, he has suffered degrading and inhumane treatment, including the denial of necessary medical treatment. Recently, Mr. Karma has been placed in an isolation cell that is causing respiratory problems and has been denied adequate food and water. Additionally, Indonesian authorities have repeatedly threatened to move Mr. Karma to Nusa Kambangan Prison, which reputedly has the worst prison conditions in Papua.

We urge your government uphold its commitments to international law and to its own domestic law and immediately and unconditionally release Mr. Karma.