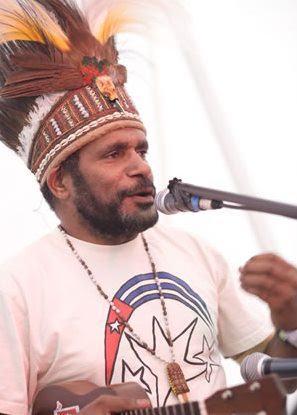 Benny Wenda campaigns for the self-determination of his people on a wide range of fronts. His village was bombed by Indonesia when he was a child and many of his family were killed. Later, he began to campaign peacefully to free his people. For this 'crime' he was arrested, tortured and threatened with death. Following his escape from custody while on trial, he gained political asylum in Britain, where he set up the Oxford-based Free West Papua Campaign in 2004 to spread awareness of human rights violations in West Papua and highlight the right of self-determination for its people.

He helped found the International Parliamentarians for West Papua and International Lawyers for West Papua. Benny travels tirelessly, meeting with political officials, journalists, others and giving talks at universities, local action groups and festivals, raising awareness about the plight of his people.

In 2011, the Indonesian Government issued an International Arrest Warrant for Benny through Interpol. This move was widely regarded as an attempt to silence him. Fair Trials International led an appeal to have the Red Notice removed so that he could once again travel freely. In August 2012, in a landmark case Interpol removed the Red Notice, after an investigation concluded that the Indonesian Government had abused the system in a politically motivated attempt to silence Benny.