This edition's Perspective is an interview with Octo Mote, General Secretary of the United Liberation Movement for West Papua, on the prospects for MSG membership.

In UPDATE (covering February and March) the West Papua Advocacy Team announces that it has awarded its 2015 "John Rumbiak Human Rights Defenders Award" to the people and government of Vanuatu. Security forces in Yahukimo District have fired on civilians who were raising funds for humanitarian relief in cyclone-ravaged Vanuatu, killing one and wounding four. Indonesia's Foreign Minister was dispatched to three Pacific island states to try to dampen growing support for West Papua's application to join the Melanesian Spearhead Group. Archbishop Tutu urged the United Nations to investigate the fraudulent "Act of Free Choice" through which Indonesia forcibly annexed West Papua. Rights groups have called for Indonesia to address outstanding human rights cases in West Papua. Four youths were beaten by security forces in Jayapura. Plans by Freeport to construct a smelter in Papua have not involved the Kamoro on whose land the smelter will be located. The Kamoro have long suffered from the effects of Freeport's mining operations. 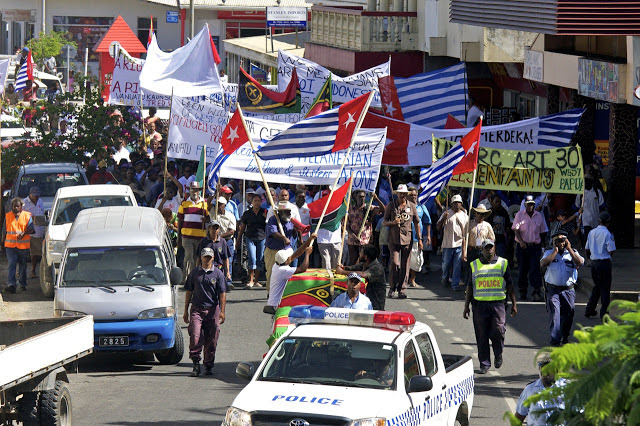 In CHRONICLE, we note upcoming demonstrations in London and New York; an in-depth analysis of Jakarta's security approach to West Papua; an argument that human rights violations fuel Melanesian support for West Papuans, and a look at ongoing media restrictions.
Posted by John at 1:06 PM