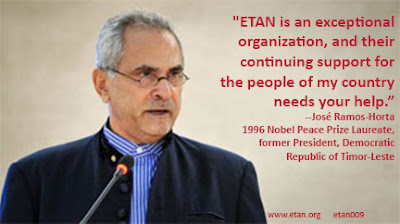 Dear friend of my beloved country,
Timor-Leste recently celebrated the 41st anniversary of our Declaration of Independence, a right and a dream that was finally realized in 2002. For the last quarter-century of our journey, the East Timor and Indonesia Action Network (ETAN) has been among our most effective and consistent supporters. Their solidarity has been exemplary, beginning during the brutal, difficult depths of the illegal Indonesian military occupation and continuing through the economic and political challenges we face today as a 14-year-old, post-conflict, post-colonial, sovereign nation.
Twenty-five years ago, a month after Indonesian troops brutally massacred young, nonviolent Timorese protesters at Santa Cruz cemetery in Dili, peace and justice activists organized a peaceful vigil in front of the Indonesian Mission to the United Nations. With participation from people around the United States, that quickly grew into a national organization which, by 1999, had 12,000 members in 28 local chapters.  Their protests and lobbying of the U.S. government and the United Nations were a vital element in enabling my people to vote in a UN-supervised referendum. As you know, Indonesian efforts to intimidate us failed, and the overwhelming mandate for independence led to Timor-Leste becoming the first new sovereign nation of the 21st century.
Without solidarity from international friends like ETAN, Timor-Leste’s dream of independence would not have become a reality.
Before the referendum, I served as Timor-Leste’s Foreign Minister in exile, lobbying decision makers all over the world for my people’s right to self-determination. Although ETAN always acted independently, we collaborated closely to encourage the U.S. government to abandon its diplomatic and military support for the Suharto dictatorship’s illegal occupation.
Since 2002, I have been the Foreign Minister, Prime Minister and President of the Democratic Republic of Timor-Leste. As I evolved from diplomat-in-exile to Head of State, ETAN maintained their solidarity with my people. In government, I had to make difficult decisions concerning past crimes in the interests of better relations with post-Suharto Indonesia, our largest neighbor and biggest trading partner.  Although ETAN and I sometimes have different views on issues like accountability for past crimes and self-determination for West Papua, I know that their positions are based on principle, and I admire and respect their tenacity.
For the last five years, I have worked to improve the effectiveness of UN peacekeeping worldwide. I have helped Guinea-Bissau and other conflict-affected countries strive for the peace and human rights that the people of Timor-Leste are finally able to enjoy. I know how unusual – and how important – it is for people living under repression and conflict to have reliable, committed supporters in places like the United States.
DONATE HERE
Timor-Leste never attracted widespread popular attention in the United States, even during the peak of our struggle against violent occupation. Since the killing ended, we have become a “normal” country, and U.S. government policy now respects the rights of my people. It is even more difficult to get Americans to care about a small nation on the other side of the world, which is why ETAN’s work continues to be essential.
ETAN’s email list is an invaluable source of information, from a variety of perspectives, for more than 4,600 people around the globe. Their steadfast support for resolving permanent maritime boundaries with our neighbors, especially Australia, continues the international solidarity that was crucial to achieving sovereignty over Timor-Leste’s land territory.  As we evolve from a petroleum-export-dependent nation to one whose economy is based on our own resources and labor, ETAN’s support and encouragement continue to be irreplaceable.
In 2012, on the 10th anniversary of the restoration of our independence, I was pleased to join in awarding both ETAN and its co-founder Charles Scheiner with the Ordem de Timor-Leste for their support for our liberation.
ETAN's actions and campaigns have always been based on the interests of the people, developed after consulting our civil society. Although ETAN’s annual budget is smaller than virtually every other international organization involved with our country, the work that they do is invaluable.
ETAN is an exceptional organization, and their continuing support for the people of my country needs your help. I recently made a sizeable donation to ETAN, and I hope you will also do so.
Sincerely,
José Ramos-Horta
Nobel Peace Prize Laureate and former President, Democratic Republic of Timor-Leste
Posted by John at 8:55 AM