Ex-Kopassus officer Gatot Purwanto revelation in Tempo magazine that he participated in the deliberate killing of the Balibo 5 in October 1975 is important, but contradictory and apparently designed to provide a justification for the killings. If taken at face value, it would absolve his superiors and leave largely intact the Indonesian version of events that crossfire was ultimately responsible for the killings.

The interview and Tempo cover story grow out of attempts to show the "Balibo" film in Indonesia, which was banned by the Indonesian censors. (The Alliance of Indonesia Journalists [AJI] did show the film, defying the ban.) In recent years, other films (documentaries) on Timor have also been banned from showing at the Jakarta International Film Festival (Jiffest). The censorship shows that in post-Suharto Indonesia the establishment is more interested in covering up past crimes and protecting the military officers who committed them, than in expanding democratic freedoms.

As Shirley Shackleton, widow of the murdered Balibo journalist Gregory Shackleton and a staunch advocate for accountability for the human rights crimes committed in East Timor, says that at least part of Purwanto's "confession" contradicts multiple eyewitness testimony. ''I think it [his statement] is a smokescreen to protect his commanding officer, Yunus Yosfiah so that Yosfiah will be able to say, 'I've got eyewitnesses,'' Shackleton, told the Sydney Morning Herald.

Purwanto, who with other Indonesian soliders had illegally entered then Portuguese Timor, told Tempo: "If we let them live, they would tell everyone it was an Indonesian invasion. If they died and we abandoned them, there would be evidence that they were shot in territory controlled by Indonesian guerrillas. So, the simple way was to eliminate everything. We just claimed not to know anything. It was the instant reaction at the time." Purwanto also said "the shots happened when we were provoked into shooting at the place where they were hiding, because shots came from there," while they were waiting for orders.


"He's saying it wasn't crossfire. He also says that the troops fired after a shot came from behind the journalists. (But) there was no one in that village - it was completely deserted. That's bulls---. Team Susi was an assassination squad sent to shut them up. This was bloody murder."


Both the Timor-Leste Commission for Reception, Truth and Reconciliation (CAVR) and the New South Wales Coroner, citing eyewitness accounts,  found there was no crossfire.

The Australian Federal Police, following up on the coroner's report are conducting a war crimes inquiry. Indonesia, always ready to try to bury past military crimes, is refusing to cooperate. It is sticking to the line that the journalists died in crossfire.
Foreign Minister Marty Natalegawa said the restriction was to protect the country's image abroad .Minister of Culture and Tourism Jero Wacik echoed the argument the "movie did discredit Indonesia and its military and could reopen old wounds between Indonesia, East Timor and Australia." The movie already has been widely screened in both countries (dubbed into Tetum for East Timorese audiences), leading to demands for justice and accountability, but no calls to break relations or invasion of Indonesia.
The Indonesian military (TNI) unsurprisingly called on Indonesians to respect the Film Censorship Institute (LSF) decision: "It has been banned by the LSF. The institute is the people's voice. So let us respect the people's voice," Army Chief Gen. George Toisutta said. Of course, "If the movie hasn't even been screened yet, how could the public demand that the government ban it?" AJI's Ezki Suyanto told the Jakarta Globe.

In the Jakarta Post, journalist Aboeprijadi Santoso puts the ongoing cover up in context:


"So, is the Balibo incident really any different to other unresolved atrocities in which army intelligence units, claiming to act in the interest of the state, took the lives of innocent civilians?

"Forget for a moment the great tragedies of 1965-1966 and the prolonged war in and around East Timor's Matebian in the late 1970s. Remember instead the 1983 massacre of Kraras villagers in East Timor, the 1980s torture center in a Pidie village, Aceh, the 1984 Tanjung Priok killings, the 1989 Talangsari assault or the more recent assassination of rights activist Munir, to name a few.

Such cases were never clarified and ended up in impunity apparently because they were all part and parcel of state's sacred mission and were justified as such."


As Human Rights Watch said, “Instead of spending its time trying to airbrush from history what happened in East Timor, the Indonesian government should keep its promise to hold those who committed horrendous abuses, such as the killing of these six journalists, accountable."

The sixth journalist is Roger East, who was murdered on the day of the Indonesia's full scale assault on December 7, 1975. Some of East's dispatches from East Timor in November 1975 are available here.

Purwanto latter served in occupied East Timor as a top intelligence officer. He tried to frame Constancio Pinto as an intel agent around the time of the November 1991 Santa Cruz massacre. He was later relieved of duty, in response to the intense international pressure following the massacre. 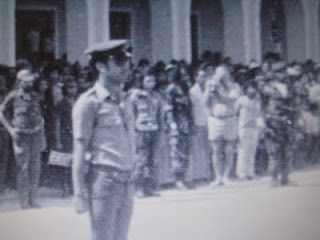