On 15 January 2010, the Prime Minister, President of the Republic, Minister of Infrastructure and President of Parliament, together with a few ambassadors, laid the cornerstone for the Hera generating project, attended by more than 100 Government officials and a few others, although virtually nobody from civil society, international agencies or the political opposition was present. This is the first element of a $360 million system of two power plants which will be powered by heavy fuel and 800 km of high-voltage power lines. It is intended to power 12 districts within two years.

A contract was signed in October 2008 with Chinese Nuclear Industry Construction Company #22, with promises to electrify the nation by the end of 2009. However, work at the Hera site was suspended in mid-2009, and major technical changes were made in the project design. It will no longer use second-hand generators, can be adapted in the future to other fuels, and will have a more reliable closed-loop grid design.

Speakers at the Hera ceremony were defensive, attacking those who suggested improvements to the project. Photographs, complete Tetum audio recordings and unofficial English and Tetum transcripts by La'o Hamutuk are available at http://www.laohamutuk.org/Oil/Power/cornerstone/10PowerHeraCornerstone.htm . 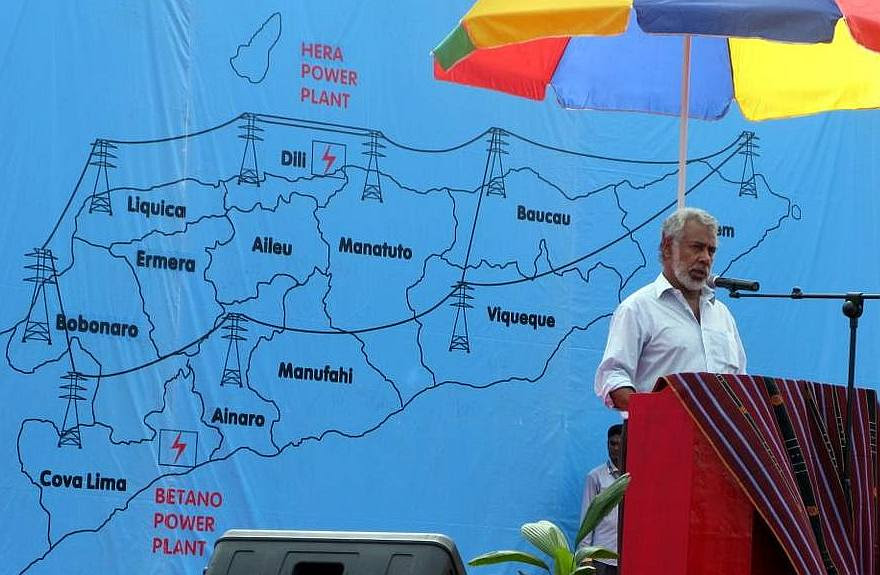 Betano is in Manufahi district, not in Covalima as shown on the banner behind the Prime Minister Xanana Gusmao. Photos from La'o Hamutuk,

Abridged excerpts from the speeches which preceded the laying of the cornerstone follow below.

In Hera we are building one generation station of 120 megawatts (MW) capacity, another in Betano with capacity 130 MW. This national grid will have nine substations to provide electric energy to the local population and communities. We adopt the international standard of 150 kilovolts (KV), which will allow us to interconnect with other countries. The grid system has a total distance of 794 km. This project will be completed at the end of 2011.

The company which is constructing the electric centers has provided a plan for managing and monitoring the environment. Machine operations will adhere to the rules established by the Kyoto Protocol.

This is a big day for our country. After years of slow and good studies, we all have reached the conclusion that what I am presenting today is the best thing.

Timor’s development needs to start with basic infrastructure, electricity. This electric generation is not only from heavy oil or fuel or gas, but we have also studied alternative and renewable energies we can use now. With this big network, we will have the power to distribute electricity from this generator and from anywhere else, maybe power from our wind energy.

Congratulations to the Prime Minister because with your courage, your vision, you took a decision which is important to begin the process of industrialization and modernization of this nation. When you are a leader, sometimes you have to make a decision with courage and not listen to criticism that comes from many places, they say they are the most concerned about the environment and the government isn't concerned.

No nation can move ahead without electricity, without roads, without education or without health.

For the past 20 years I've studied about environment and alternative energy. If highly industrialized countries have a good environmental record today, they recently began to repair it. For example Portugal is advanced in alternative energy; within five years, 70% of Portugal’s energy will be alternative. This nation has existed for 800 years. Other nations, like Japan, many in Central Europe, Eastern Europe, Korea, they will use heavy oil. Some people who criticize heavy oil think about technology from 50 or 100 years ago. Technology modernizes, heavy oil technology in the 21st century is not 19th century technology.

I can confidently say that this project will follow the recommendations of World Bank standards about environmental impact, follow the recommendations in the Kyoto Protocol. I am also pleased with the Government’s ideas that, at the same time as we start this heavy fuel process, we also look at solar, wind, hydroelectric, biogas and everything else, but we have to be realistic. In 30 or 50 years, when we read about today’s solar energy, we will call it like 19th century technology. But we can believe that in 5, 10, or 20 years we can use 100% solar or wind in Timor-Leste.

If the international community started in 1999 to put $3 billion dollars or more, thinking with vision, thinking with seriousness, thinking strategically, and said “We donors will electrify Timor-Leste, build a new road network, open a new airport, build a new port.”  If they did this, the $3 billion dollars would be well spent, and today Timor-Leste would already have 24-hour electricity... Because they didn't do this, they know, and some criticize Timor-Leste. But we’re fortunate to have our own money. Because of this we have to build what we need, it’s our responsibility. Therefore today, I say: "Support this project 100% to move ahead."

We launch the first stone of this major work, which comes from many debates: whether the Government could do it, if it will kill everyone, destroy everything, not only destroy our nature but also destroy the island we live on.

Parliament's infrastructure committee did a comparative study, finding that works like this have not yet killed anybody. In many countries they are already operating, and they use heavy oil.

When Parliament visits our people, they ask about three problems: electricity, water and roads. After that, education, health, agriculture, etc.

We take this opportunity to ask all the people of Timor-Leste to participate. Don't take the wires to tie your cows, destroy some blocks or take something to build a pigpen, because we all need this big work.

The Secretary of State for Energy is moving ahead with solar cells, biogas from cow manure to produce electricity. We hope that this will begin in 2010 in some sukus, and in 2011 electricity will go to subdistricts, and finally, we will bring these power lines to sukus and aldeias.

This is a big challenge for the AMP government and I trust that the Government led by our big brother Xanana Gusmão will meet these obligations, will really implement its plans in the next two years.

We need to ask this company China Nuclear to undertake this work with the community, for our people. China and Timor have a very good relationship, very strong in difficult times, and we hope that the director of this company will become an ambassador between our two peoples.