Timor-Leste Past and Present: Talks and an Exhibitwith Frederic Durand, Charles Scheiner and Jill Sternberg

Frederic Durand, an historian who has focused on East Timor (Timor-Leste) for many years, has put together an bilingual (Portuguese and English) exhibit on Timorese history that has not been shown yet in the U.S. titled "Timor-Leste: A New State with Century-Old Roots in World History." He is flying over from Paris to introduce the exhibit, which will be on display at The Brooklyn Commons for a week following his talk on Saturday night. Charles Scheiner and Jill Sternberg are long-time East Timor and Indonesia Action Network (ETAN) activists; they recently returned to U.S. after years of living and working in Timor-Leste. They will speak about current issues and challenges a dozen years after independence.
Contact ETAN or 718-596-7668 for more info. 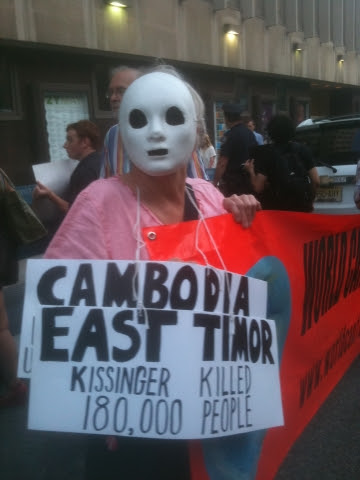 Kissinger has another book to hawk. Join ETAN and other organizations in protesting Kissinger's appearance at the 92nd St. Y.

Call the 'Y and ask them why they are hosting an accused war criminal and treating him as a respectable commentator on international affairs. Urge them to cancel the event. Call the Y: 212-415-5500.

On December 6, 1975, then Secretary of State Kissinger and President Gerald Ford visited Jakarta. At their meeting, Ford gave Indonesia's dictator Suharto an explicit go ahead for the invasion of East Timor and Indonesia invaded the next day. According to East Timor's Commission on Reception, Truth and Reconciliation (CAVR) up to 180,000 died as a direct result of the illegal invasion and occupation. Declassified and leaked documents show that Kissinger understood that Suharto was balking at invading, concerned that the U.S. would cut off its supply of weapons and military training. Kissinger guaranteed continuation of weapons shipments. According to Timor-Leste's Commission for Reception, Truth and Reconciliation as many as 180,000 people died as a result. For more on Kissinger's role in East Timor click here. Kissinger is currently out promoting his latest book World Order. 92nd St. Y event page ishere

In addition to ETAN, initial sponsors of the protest include War Criminals Watch, East Timor and Indonesia Action Network (ETAN) and NYC War Resisters League. Let us know if your organization would like to sponsor.