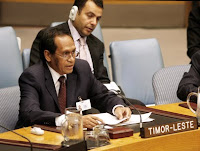 
10:57 - Now the UK. Signs of progress - Suco elections, transfers of police responsibility. Need for clarity of role of defense forces. Says need to do more to address impunity for past human rights crimes and need to strengthen UN serious crimes effort (but with no mention of how). In general, need to focus on transfer of responsiblities to TL.

11:04 Costa Rica - 2 major concerns - slow pace of development of rule of law and role of army. 2 events worrying A) criticism leveled of judicial system and then the handover of M. Bere to Indonesian, decisions of political bodies adopted after do not validate actions which violate rule of law. See no clear purpose in TL having a military. Urge Timorese authorites to assign clear tasks to army.

11:10 Burkina Faso's now up. welcome "robust policy" of vetting police officers (some might take issue with how much attention was paid to the vetting). Passing reference to fight against impunity and need to compensate victims.

11:16 Now for China. I heard no mention of impunity. caling for "factions" to set aside differences to focus on nation-building. Support effort to put priority on building infrastructure and reducing unemployment.

11:22 Turkey - Main issues which contributed to 2006 crisis still need to be addressed (e.g. land, poverty, poor judicial system). Agree with SG recommendation that UNMIT's strength and composition should remain, pending assessment, as did China above.

11: 27 Uganda shares observation of SG that defining a meaningful role for military is a "key challenge" of government. Note "potential reprecussions" arising from release of Martenus Bere. "It is critical that efforts be made that impunity not be condoned."

*** the UN will issue a media summary and a full transcript of this meeting over the next few days. We'll post links to them when they are available. ***

11:31 - Russia focuses on Security Sector as key to identity of independent country. Heard not mention of justice and accountability.

11:39 - Croatia - UNPol needed to remain for time-being. Encouraged by progress (!) in human rights area. But need rule of law to prevail, nothing more specific.

11:45 - Mexico - UNMIT needed for TL to make progress on governance, human rights and more. Anti-corruption commission a positive. Agrees should be no amnesty. Urges cooperation with UN on resolution of crimes from 1999 and 2006 (though mentions commission of inquiry which finished its work) also says intensif cooperation with High Commissioner of Human Rights.

11:51 Austria remembers those who lost lives at time of referendum in 1999. we welcome recommendations made by UNMIT in cooperation with HR commissioner to strengthen accountability for human rights violations. Offers some things for Timor military to do.

11:57 - Libya says actions of various political parties demonstrate that they respect the rule of law!

12:01France praises positive role played by neighbors Indonesia, New Zealand and Australia. Worried about a hasty withdrawal of UN presence, need to keep to medium strategy. Combating impunity for crimes of the past important. Support special prosecutor (?) for the investigation of serious crimes

12:06 USA says TL has made significant progress. Talks about US security assistance to TL and simultaneous military exercises in TL and Indonesia. Encourage government to strengthen justice sector to one that puts an end to impunity for grave violations for human rights. Crucial for TL to maintain efforts to reduce poverty and unemployment. US has provided $24 million this year to assist.

Thailand is up now speaking on behalf of the 10 members of ASEAN. Pleased two residual consequences of 2006 conflict - close of IDP camps, and Timor police are resuming responsibilities in some districts. Supports police capacity building and clear civilian control of security forces. Agrees UNMIT policiing should be maintained. TL needs ownership of any UN strategy for the country. No mention of justice and human rights

Sweden on behalf of European Union and others remembers the many Timorese who died in 1999 and UN staff who have died in Timor. Long-term stability and sustainable development of TL can't be taken for granted. EU concurs with maintaining UNMIT for time being. - scaling down linked to security sector reform. EU encourages use of Petroleum Fund to for investment projects and to stimulate non-oil part of the economy.

Portugal concurs with SG view of need for dialogue across all sectors of society. TL needs continued support of international community. Portugal will remain involved with mission and as a donor.

Australian led forces are shifting focus from primarily security role to defense cooperation. Need to keep in mind concept of seperations of powers to ensure a strong and independent judiciary.

Philippines spoke and repeated many of the same themes as others. But I heard no mention of justice. Is there a rule that the closer a country is geographically to Timor, the less likely it is to pay attention to justice and accountability.

South Africa spoke last is pleased with TL's progress. Development partners should align priorities with those of government and must take the long view.

Khare made some remarks in response. Thanked for support of recommendations of SG report especially that UNMIT composition and strength be maintained for now. Appreciated remarks on need to strengthen rule of law and accountability and fighting impunity, but says authorities in Timor are committed in this direction (huh!!!!) and UNMIT will work with them.